If we perturb a physical system at a given point in space and time, how does this perturbation influence this system at a different point in space and time? If the points are far away, it generally doesn't. Perturbations grow with a finite "butterfly velocity" (think chaos and the butterfly effect), and it takes a finite time for any local effect to become noticeable at a different location. This is usually not a very 'sharp' effect: the butterfly velocity is smeared out by a diffusively-widening front. Here, we calculate out-of-time-order correlators, a measure for chaos and the scrambling of quantum information, in systems where this butterfly velocity is maximal and dynamics are governed by so-called quantum circuits. Due to geometric constraints, no such widening front is possible, and these effects become much more clearly outlined: all effects are focused on the light cone x=vBt, so called since the butterfly velocity behaves as an effective light speed, and decay exponentially away from this light cone. We explicitly relate the rate at wich excitations in such a system relax towards thermal equilibrium with the rate at which OTOCs decay away from this light-cone, connecting scrambling with thermalization.

We consider the long-time limit of out-of-time-order correlators (OTOCs) in two classes of quantum lattice models with time evolution governed by local unitary quantum circuits and maximal butterfly velocity vB = 1 . Using a transfer matrix approach, we present analytic results for the long-time value of the OTOC on and inside the light cone. First, we consider ‘dual-unitary’ circuits with various levels of ergodicity, including the integrable and non-integrable kicked Ising model, where we show exponential decay away from the light cone and relate both the decay rate and the long-time value to those of the correlation functions. Second, we consider a class of kicked XY models similar to the integrable kicked Ising model, again satisfying vB = 1, highlighting that maximal butterfly velocity is not exclusive to dual-unitary circuits.

Integrability and dark states in an anisotropic central spin model

Some more work on a familiar topic: our paper on Integrability and dark states in an anisotropic central spin model just appeared on the arXiv! Together with Tamiro Villazon and Anushya Chandran from Boston University, we found that the central spin model with XX Heisenberg interactions is integrable. The central spin model with fully isotropic (XXX) interactions has long been known to be integrable and was one of the models I kept returning to during my Ph.D. research on Richardson-Gaudin models, but it came as a complete surprise to me that the XX model also is. Even more remarkable, all eigenstates have a special structure and can be classified as either bright or dark states. The bright states are experimentally accessible by tuning the central magnetic field, while in the dark states the central spin effectively decouples from its environment, leading to all kinds of interesting physical phenomena.
Also: my first last author paper!

Central spin models describe a variety of quantum systems in which a spin-1/2 qubit interacts with a bath of surrounding spins, as realized in quantum dots and defect centers in diamond. We show that the fully anisotropic central spin Hamiltonian with (XX) Heisenberg interactions is integrable. Building on the class of integrable Richardson-Gaudin models, we derive an extensive set of conserved quantities and obtain the exact eigenstates using the Bethe ansatz. These states divide into two exponentially large classes: bright states, where the qubit is entangled with the bath, and dark states, where it is not. We discuss how dark states limit qubit-assisted spin bath polarization and provide a robust long-lived quantum memory for qubit states.

More good news from APS: our paper on Variational Schrieffer-Wolff transformations for quantum many-body dynamics has been published in Physical Review B and chosen as Editors' Suggestion! It is currently highlighted on the Physical Review B homepage, with an illustration of our method: a physical model is translated to a Hamiltonian matrix, that matrix is subsequently simplified (returning an effective Hamiltonian), and we can efficiently calculate dynamics using the effective model. 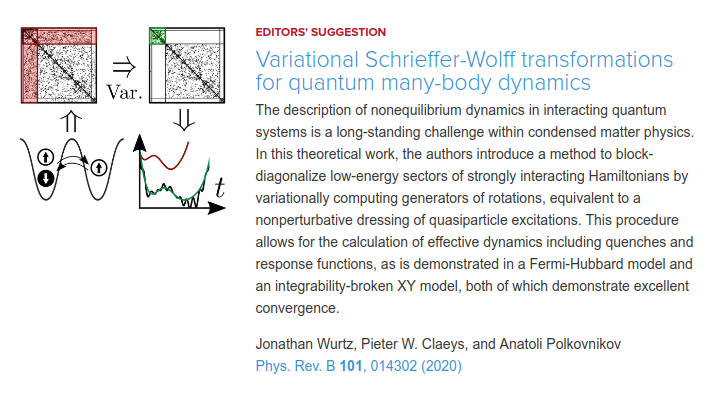 In other words: The description of nonequilibrium dynamics in interacting quantum systems is a long-standing challenge within condensed matter physics. In this theoretical work, the authors introduce a method to block-diagonalize low-energy sectors of strongly interacting Hamiltonians by variationally computing generators of rotations, equivalent to a nonperturbative dressing of quasiparticle excitations. This procedure allows for the calculation of effective dynamics including quenches and response functions, as is demonstrated in a Fermi-Hubbard model and an integrability-broken XY model, both of which demonstrate excellent convergence.