Some follow-up work on dual-unitary circuits now on arXiv! Given a dual-unitary gate, we know exactly how to calculate its dynamical properties and we can classify all dynamics. However, so far it wasn't possible to systematically construct dual-unitary gates, such that most works were restricted to qubit systems or Hadamard gates. In the paper, titled Ergodic and non-ergodic dual-unitary quantum circuits with arbitrary local Hilbert space dimension, we (perhaps not surprisingly) show how to construct dual-unitary gates for any dimension of the local Hilbert space with any desired level of ergodicity. We then also show how such systems relax to either an infinite-temperature Gibbs state or a generalized Gibbs ensemble, with an additional example on prethermalization. Joint work with Austen Lamacraft. 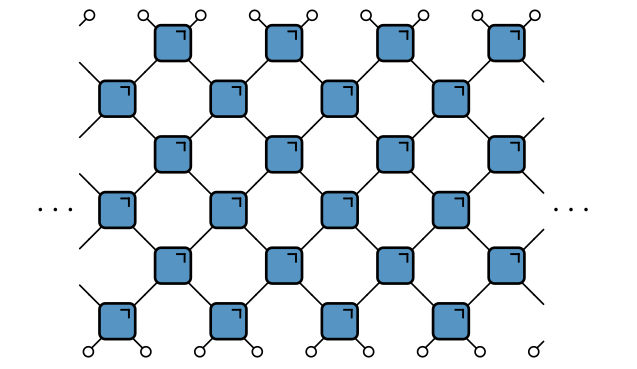 Dual-unitary quantum circuits can be used to construct 1+1 dimensional lattice models for which dynamical correlations of local observables can be explicitly calculated. We show how to analytically construct classes of dual-unitary circuits with any desired level of (non-)ergodicity for any dimension of the local Hilbert space, and present analytical results for thermalization to an infinite-temperature Gibbs state (ergodic) and a generalized Gibbs ensemble (non-ergodic). It is shown how a tunable ergodicity-inducing perturbation can be added to a non-ergodic circuit without breaking dual-unitarity, leading to the appearance of prethermalization plateaux for local observables.

Catch my recent seminar on Joshuah Heath's Quantum Fluids in Isolation virtual seminar series, where I talked and gesticulated about recent results on Thermalization and scrambling in dual-unitary circuit models. It was a fun experience, and I was glad to be part of such an interesting seminar series — do check out the upcoming and previous talks on the website.

Quantum lattice models with time evolution governed by local unitary quantum circuits can serve as a minimal model for the study of general unitary dynamics governed by local interactions. Although such circuit dynamics exhibit many of the features expected of generic many-body dynamics, exact results generally require the presence of randomness in the circuit. After a short introduction to general unitary circuit models, we discuss the class of dual-unitary circuits characterized by an underlying space-time symmetry. We show how in these models exact results can be obtained and related for the thermalization of correlations and the scrambling of out-of-time-order correlators.

Our paper on Integrability and dark states in an anisotropic central spin model is now published in Physical Review Research as a Rapid Communication! My first last-author paper, and joint work with Tamiro Villazon and Anushya Chandran.

A key image and blurb are also highlighted on the PRResearch homepage.